​Just as Glenda the good witch in the Wizard of Oz answered the scarecrow, who wanted to know why Glenda hadn’t revealed to Dorothy the keys for getting back to Kansas – “she had to learn it for herself,” so too did Adam Hall, author of The Earth Keeper, have to learn it for himself.  But getting there can be very painful.  Dorothy and her new friends, those whom she had met on her journey of self-discovery had been instructed by the “all-powerful” wizard that she’d first have to kill the Wicked Witch of the West.  “Bring me the broomstick!” boomed the loud and reverberating sound of that mighty wizard behind the curtain.

While Adam may not have had to nab a witch’s broom to get there, from reading the hard parts of his book, The Earth Keeper, I imagine if having to get his hands on a mere witches broomstick were all it would have taken to get home, that place where we are spiritually awakened to one’s true self, Adam might have rather gone on Dorothy’s yellow brick road to Oz.

Mired in the murk of discontent, Adam wades through his life unaware of the debris he’s created or its impact upon his loved ones and strangers alike.  As he continues on his journey, we become hopeful for him that he will find a way to reconcile his past mistakes. We can't help but feel for Adam.  His pain may also arouse our own discontent. Yet, we also revel in Adam’s revelation that he is able to rise, like a Phoenix, from the ashes and rubble of his own making to become Adam the new man -- Adam, the Earth Keeper.

But before he becomes that new man, the old Adam will expose the broken cords of communication and the discord and disharmony he sows with his family.  The “pave paradise and put-up a parking lot” way of conducting business will also be exposed.  We will learn that Adam, that other man; the one we don’t much care for at first, was an Earth Conqueror.  He put together billion dollar real estate deals with large parcels of land slated for development. It’s the way of the material man, who has yet to comprehend that the exchange is too much to bear. For our Adam, the exchange was almost his soul. And we all know that “it’s not nice to fool Mother Nature!”

The Earth Keeper can be disturbing and uncomfortable.  Nevertheless, don’t let this somewhat gnarled path upon which Adam travels take you too far off your own course.  Steady, now, but do keep reading for Adam will also take you through breathtakingly beautiful landscapes.  I’m not just talking about the tropical jungles and night walks through Peru, or sunbathing on the sandy shores of Malibu.  I’m speaking about the landscapes within him, and also within you.  Between the two, you’ll learn the ways of the shaman and discover the meaning of the various colorful roads upon which Adam travels.  Like Adam, you’ll learn to love and be loved again.  By the end, you might be ready to actually fall in love.  Adam did.  By the time you reach the last chapter, which is really just the beginning of a new one, you’ll fall in love with Adam, and the person you have become for having traveled along with him.

Perhaps, the real meaning of being born anew is that Truth is behind the appearance of all things, including a name. For the author of The Earth Keeper, Adam C. Hall, has found within that which he could never have found without – nor could he have found it without the spiraling of a marriage to his first love, Gigi, or his three precious daughters.  Adam’s journey wouldn’t be complete nor would it have ended in quite the same way without his meeting Lizanne, or the deep learning that takes place with his spiritual teacher, Alberto Villoldo, a shaman in every sense of the word.  The truth is it wouldn’t be the same without you and me, the reader, who has given Adam the opportunity to tell his story and also to be free from it.  Ultimately, it is proof of what Dorothy knew all along:  there really is no place like home. 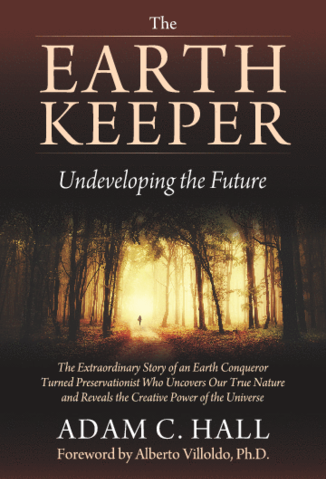 THE EARTH KEEPER: UNDEVELOPING THE FUTURE

Right Place!  Right Time!  Write NOW!
Let  Writes for You!  get you started in the

right  direction with your next writing project!